Leap Year Proposals | How to Pop the Question | Wedding Celebrant 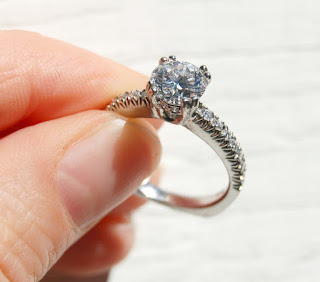 Today’s the day we get to bin all that submissive “re-active” stuff and get “pro-active”! It’s the day to make things happen by reaching out for all that February 29th has to offer.

In other words, why wait around, for your man to finally pop the question. If you want to marry him, then you propose.

It would seem that we have the impatient, Irish St Bridget to thank for the tradition of Leap Year proposals. Understandably she was somewhat miffed about the length of time women were expected to wait for a man to ask for their hand in marriage.

Apparently she had a chat about this with St Patrick and together they came up with the idea that the situation could be reversed on February 29th - every four years. In the rather sexist manner of the day, this became known as St Bridget’s Complaint.

The first documented case of a woman taking advantage of the situation was in 13th Century Scotland where a law was passed imposing a fine on any man who rejected a February 29th proposal. The most common penalty was that he would have to buy a pair of gloves for the lady in question.

In some European countries February 29th became known as Bachelors’ Day and fines for rejecting a wedding proposal would be as high as buying the woman twelve pairs of gloves - one pair for each month of the year. The new gloves were also a handy way of hiding the shame of a ring-less finger.

You don’t have to go down on one knee or try to recreate the ‘flowers and music’ proposal setting of your own dreams. Instead,  I would suggest, attempt to get inside his male head. Obviously, if you want to spend the rest of your life with him, you know him really well and it shouldn’t be too difficult to put together the sort of scenario that would absolutely bowl him over. It’s highly likely that favourite food is involved. After all it is said that the way to his heart is via his stomach.

However, chances are - this question should not be popped in a restaurant or other public place. Unless he is a publicity-hungry cast member of the Only Way is Essex, or some other reality TV series, chances are he would much prefer a private scenario which would also be considerably more romantic.

It would also be unwise to attempt to compete with his favourite football team or other activity which is all-absorbing. But, sharing a joint activity, like taking a walk together, cooking or maybe even on a ski slope, might be a good moment to bring up the subject of getting married.

Or, if he’s sporty - and enjoys surprises - perhaps weave something novel in alongside his hobby … like jumping out of a bush on his usual jogging circuit and waving a sign saying “Will You Marry Me?”

If he’s more likely to favour a subtle approach, you could even consider dropping hints by writing an article like this ... And don’t worry, if today just didn’t feel quite right, don’t panic girls. Tradition allows you the rest of the leap year in which to pop the question.
Posted by Unknown at 16:54 No comments:

Broom Jumping | and Hand Fasting | at the Bank | Family Celebrant

My bags are packed and I’m ready to go … actually, that is not quite true.
The things a Celebrant needs to take to an exhibition would never fit into any bag - normal or otherwise.

First there are the banners … when fully extended these two beauties measure 200 cm high by 80 cm wide. Happily these each come with a very clever back pole which contracts down to fit in the base and a handy carrying bag about the size of a rolled yoga mat.


Then there are the decorated corn brooms for broom jumping. I’ve been busy painting these white before the fun part of dressing them up begins. One is in a distinctive deep pink and dark green theme (to match a Save the Date card) - number two is still in my imagination but I’m thinking a bright blue might be rather eye-catching.

All the other bits and pieces - including my chest of ribbons for hand fasting, bottles of coloured sand, candles, glass smashing bags etc - will, I suppose fit into some sort of carrying bag alongside the leaflets and other paperwork.

So, with all this paraphernalia, I will be in Barclays Bank, Aylsham tomorrow (Monday 8th) and again on Friday (12th). Please note the pre-Valentine’s Day dates and don’t forget that this is a Leap Year with all that that means …


In the unlikely event that any readers might be in Norfolk next week …. I’d love to welcome you to my display.