Traditional with a Twist - your wedding style ... with an open mind 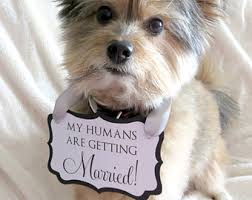 Just before Christmas I was honoured to help a couple celebrate their wedding. As a Family Celebrant, there is nothing unusual in that … after all it is a major part of what we do.

However, what was unusual was that this couple wanted a Traditional Ceremony.  As a member of the UK Society of Celebrants, I can produce a glittering array of surprising elements and weddings with any theme you can imagine, but this was the first time I had been asked for something conventional.

Despite showing a polite interest, at our first meeting, the bride and groom made it quite clear that, while hand-fasting, unity sand or candle ceremonies might be ideal for others they were definitely not right for them. I decided not to even mention glass smashing or broom jumping.

Things went further off piste when I was told that the decision to hold the ceremony on Friday evening was so that they could “get it out of the way” leaving them free to enjoy the rest of the weekend party with their friends in the beautifully quirky arts and crafts style country house venue.

While I respected their style, and absolutely understand how important it is that any ceremony reflects the personalities of those involved, I was never going to produce a sort of throwaway - “get it out of the way”- type of ceremony. I was certain that some sort of thoughtless exchange of rings and promises would be regretted in the future.

This couple - Tim and Helga - had been together for more than twenty years and I was quietly determined to make sure that their wedding ceremony would be magical…. traditional yes; but still magical and memorable. Happily - after a few chats during which we got to know each other - they trusted me to do just that. 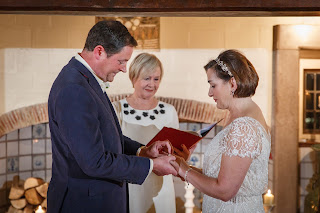 Over the subsequent weeks I suggested various readings and the words to accompany the exchange of rings and the promises they might like to make to each other. Together the final script and order of ceremony was agreed and at the rehearsal  we all felt that it was “just right”. They even approved of the surprise candle I had decorated for them the with their signature logo, names and date.

Unsurprisingly, and in keeping with traditional wedding protocol, the groom did not see his bride before the ceremony and Helga’s dress was, of course, a secret.

I felt truly privileged to see the expression on the Tim’s face as he turned round to see his beautiful bride for the first time - it was joyful and moving to witness the bond between them.

Call me old fashioned, but I  think it’s a shame to throw away all conventions when planning a modern wedding. For the groom and guests there is nothing like the Big Reveal - that moment when the bride - of course, looking fabulous - makes her entrance and approaches her new life.

This cannot be the same if everyone has already seen her in the dress - hair done and make up perfect for pre-wedding photos. And what man really wants to go shopping with his fiancée for her wedding outfit - I just don’t get it!


Photos of Tim and Helga's wedding are by Chris Taylor - Norfolk and Suffolk wedding photographer  www.christaylorphoto.co.uk
Posted by Unknown at 16:38 No comments: